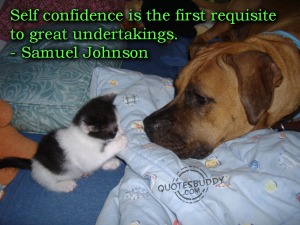 When I was moving up through the colored belt ranks in taekwondo, I tested every two months. I didn’t need too long to learn every form and tested on a regular schedule. Part of testing allows students three chances to perform the form. (This permission changes once a student reaches brown belt. At least it does in my club.) This is for the student’s benefit. He/she may be nervous, have a brain glitch and execute an incorrect technique or freeze with a blank mind. The instructor has allowed the student to test in the first place, so there is confidence that the student is able to perform to satisfaction but sometimes the nerves take temporary control. That’s okay. First time might be a so-so form, so shake off the nerves, and do it again. The judges will score the best performance.

When I tested I always asked to do my form a second time. Did I lack confidence in my own ability? No. My thought process worked like this: If the judge said no, then I knew (with a near certainty) that I had passed. Four belts in, my instructor waved me off when I raised my hand to ask and from then on, I didn’t ask at any other testing.

I’ve also never had a no-change, where I failed a testing. My regularly scheduled testings got hung up when I reached Fourth Degree Black Belt in 2000. I was eligible (time-wise) to test for Fifth in 2004 but hadn’t fulfilled other requirements. So I tested in 2007. In terms of time, I was eligible to test for Sixth last June, but those pesky requirements got in the way again.

I don’t want to sound like I am bragging by saying I never failed a test. I just want to express that I had confidence that I could and would pass. Yes, I was a bit shaken when I tested for Fourth when I didn’t break my boards the first time. I was doing a front elbow combined with a 360 degree jump side kick. I had worked very hard to make that kick work. (I remember changing kicks a year or two before to this kick from a jump side kick over three obstacles. I did NOT have confidence I could achieve that kick after missing twice at a black belt camp midterm testing.) Anyway, I knew I was able to break with that kick and I was over-confident about the front elbow, thinking it was easy. What happened? I failed the first time on the elbow. I turned around and executed the kick no problem but I mentally smacked myself for not breaking the elbow the first time. (I did break the second time.)

I take that taekwondo confidence and put it into my writing. I knew one day I would be published. I kept trying and, unfortunately, I failed a lot. I knew part of the failure my fault. I still needed to learn about writing. (Either the manuscript or query letters). (The other fault lies with those pesky agents and publishers who couldn’t see my story was, ahem, darn good.)

Of course, I did find a publisher who accepted two of my stories and another who published my third. I also had four of my short stories accepted. (A couple years later I requested their return and the details of that are not to be discussed in this forum. I just wanted to point out I had confidence that some of my numerous shorts would finally be deemed worthy.)

I’m ecstatic that I’m also published in a martial arts magazine and hope to continue the relationship with Taekwondo Times for a long time.

See, I am confident I write stories and books worthy of acceptance. I feel confident each time I pick up a pen to start scribbling away. (Yes, some would say it IS scribbling with the quality of my handwriting.) I want to create a cool story so I set my mind to do just that.

I’ve set my mind to test one day for Sixth Degree. Circumstances beyond my control may delay that but I’m not going to give up.

Confidence will find a way.

Each third Saturday of the month, unless otherwise indicated: Sisters in Crime, Cafe Diem, Ankeny

Chills Down Your Spine: https://amzn.to/2PwAyEY

Death of the Demon Machine: https://amzn.to/2Bbk8ch

The Light Won't Go Out: https://amzn.to/2DpuNSb